“Our One Father, we are traveling by many true paths  unto Thy one abode of Light. Make us feel that the diverse religions are branches of Thy One Tree of Truth. Teach us to chant in harmony our love’s many expressions unto Thee, that we may hear Thy Song’s refrain in all our tender chants to Thee.”
— Paramhansa Yogananda, Whispers From Eternity, 1929 edition

SRF members may be surprised—even shocked—to learn that SRF has spent many millions of dollars on an eleven-year lawsuit against Ananda Church of Self-Realizaton. And this lawsuit is still going on, with no end in sight. (Note: The lawsuit ended in 2002, with the judge noting that Ananda had won at least 95% of the issues.)

Ananda is an autonomous network of seven spiritual communities and churches founded by Swami Kriyananda, a direct disciple, since 1948, of Paramhansa Yogananda. Members of Ananda are also disciples of Yogananda, dedicated to sharing his teachings with the world.

Ananda has specialized in developing Yogananda’s ideal of “world brotherhood colonies”—home, job, and church in one place, as Yogananda described them. Small intentional communities allow devotees to worship, live, and work together, dedicated to the spiritual life.

For years, SRF has strongly disapproved of Kriyananda and Ananda (see article below). Finally, in 1990, they filed a massive lawsuit. The potential had been building for years. The final impetus was Ananda’s decision to use “Self-realization” as part of its name.

Yogananda chose “Self-realization” as the best term to describe the timeless teachings of India. The concept of Self-realization has been part of the yoga tradition for millennia. For devotees of Yogananda, “Self-realization” is the name of our religion. SRF, however, feels it has exclusive rights to the term.

Ananda agrees to drop Self-Realization from its name

Ananda agreed to drop Self-Realization from its name. However, SRF refused to drop its suit. SRF said all they really wanted was for Ananda to change its name. Ananda didn’t want a theological disagreement with SRF to become a courtroom battle, so we agreed to change our name.

In fact, SRF’s claims against Ananda were so significant that the federal judge himself remarked that what SRF was asking would “effectively put [Ananda] out of business.” He then added, “And that bothers me.”

The religious freedom case of the century

SRF seeks a religious monopoly on Yogananda’s teachings. Yet this strikes at the very heart of one of America’s most cherished principles: freedom of religion. It also threatens to derail the mission of the great master for the ages. Because of the principles at stake, one attorney calls this case the “religious freedom case of the century.”

In actuality, the fundamental disagreement between the two organizations is theological, not legal. Ananda provides evidence on this website that in the 50 years since Yogananda’s passing, SRF has made extensive and substantive changes to Yogananda’s teachings that, we believe, are inconsistent with Yogananda’s true ideals. SRF has even suppressed key aspects of Yogananda’s work, including his desire for world brotherhood colonies for householder devotees.

Is Yogananda’s spiritual legacy really the private property of a single organization? Or do the great master and his teachings belong to truth-seeking souls everywhere?

The guru-disciple relationship has been honored in India for thousands of years. The first sentence of Yogananda’s Autobiography of a Yogi refers to it:

“The characteristic features of Indian culture have long been a search for ultimate verities and the concomitant disciple-guru relationship.” (First Edition, 1946)

SRF is changing Yogananda’s teachings to make the institution a required intermediary between the disciples and their own master. This is the heart of the disagreement between SRF and Ananda.

Theological questions cannot be litigated in court. So SRF has translated their theological dispute with Ananda into copyright, trademark, publicity rights, and other such justiciable issues. So far, SRF has lost virtually every issue. But the battle is far from over.

SRF is a wealthy organization; Ananda is not. Ananda has been forced to spend millions of dollars defending itself, money raised dollar by dollar from friends around the world. If the courts will not grant SRF a monopoly on Yogananda’s teachings, driving Ananda into bankruptcy is another way of obtaining it.

Do SRF members know what is happening?

SRF is a secretive organization. Even after 11 years, many SRF monastics know very little about this lawsuit. Many SRF members don’t even know it is happening. Ananda feels SRF members have a right, and in a real sense, a duty, to become informed about what their organization is doing.

If SRF won’t make public the facts of their lawsuit, then Ananda feels it must. We appeal to devotees everywhere to become informed, and, we hope, inspired to speak out about what SRF is doing to Ananda, and to Yogananda’s mission for the world.

We sincerely hope that calm reason and kind hearts can bring about a more appropriate resolution than continuing litigation. Thousands of hours of devotees’ time and millions of dollars of devotees’ money could so much better be spent serving Yogananda’s work, rather than battling in court over who has a right to serve him.

Swami Kriyananda was a loved and respected SRF minister and teacher. He came to Yogananda in 1948 and served his guru through SRF for 14 years as head of the monks, director of center activities, senior minister, and SRF’s principal lecturer. He traveled extensively, sharing Yogananda’s message with students worldwide. Kriyananda was the first person appointed to SRF’s board of directors after Yogananda’s passing, and was made Vice President in 1960.

In 1962, in one of the most painful experiences of his life, abruptly, without warning, and without a hearing, Kriyananda was dismissed from the organization he loved because of an unusually personal vendetta against him by a single board member, Tara Mata. Kriyananda writes about this painful and profoundly life-changing loss in My Separation from SRF and also in his book, A Place Called Ananda. Tara Mata’s words to him at the time of his ouster from SRF were: “From now on, we want to forget that you ever lived.”

As it happened, however, SRF wasn’t able to forget

In 1968, Kriyananda founded the first Ananda community, a rural retreat on 72 acres of land in the foothills of the Sierra Nevadas in northern California. From that simple beginning, Ananda has grown into an international organization, with six established communities, including a retreat in Assisi, Italy, and a seventh community developing in Rhode Island.

From the beginning, SRF has kept close track of Ananda’s development. SRF considers itself the sole authorized channel for Yogananda’s teachings. In various ways over the years, SRF’s disapproval has been clearly communicated to Kriyananda and members of Ananda.

As a disciple—especially as a direct disciple—Swami Kriyananda has received personal instruction from Yogananda, guiding his life and service. Yogananda asked him, among many things, to teach, give Kriya, write, and to edit Yogananda’s own writings. When he was cast out of SRF and instructed by Tara Mata never to speak in public of Yogananda again, Kriyananda ultimately felt he must be true to his guru’s instructions. Gradually, he resumed the work which Yogananda had asked and trained him to do.

Despite Kriyananda’s frequent overtures of friendship—even offering to donate Ananda to SRF, SRF’s intense disapproval has only grown.

Still, Kriyananda encourages Ananda members to visit SRF centers if they feel drawn to do so. Let people experience both organizations, he says. Then they can decide for themselves, from direct experience, where they feel inspiration.

2 thoughts on “Why Has SRF Spent Millions Suing Fellow Devotees?” 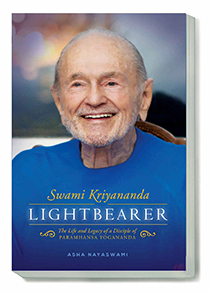 THE TRUE STORY OF ANANDA
Told by Those Who Were There
Follow this link to learn the inside story of Ananda — how Paramhansa Yogananda brought a foremost disciple with him to complete the “Great Work,” as he called it, of correcting certain misguided directions in his work.

Speaking to Daya Mata in his last years, Yogananda lamented, “How you all will change the work after I am gone. If I were to return in a hundred years I doubt if I would even recognize it.”

SRF claims that Ananda is not a legitimate branch of the Master’s work, that Kriyananda is an interloper, that the Kriya Yoga initiation offered by Ananda is not legitimate, and that Ananda is just a bunch of hippies living in primitive conditions, and that the whole thing is destined to fail. Now you can learn the true story in the words of the Ananda members themselves that reveal their sincere dedication, and their devotion to serving the Guru’s work creatively, free from top-down, micromanaging, Kali Yuga centralized control.

You will learn about SRF’s draconian lawsuit against Ananda in which it attempted to gain sole ownership of the Master’s name, writings, and likeness, and how, in the judge’s own words, they attempted unsuccessfully to “put that organization out of business” by bankrupting it through protracted litigation. Even though SRF spent over $30 million of its members’ money, hiring one of the world’s largest law firms in its effort to destroy Ananda, Ananda prevailed, winning (again in the judge’s words) at least 95 percent of the issues in the case. American law does not look kindly on religious monopolies.
In addition, you will hear the deeply inspiring personal stories of people who dedicated themselves to living by sincere self-offering to God and Guru in prayer and meditation and humble service to Their cause, and how, as a result, they found profound success and happiness.