On the train from Bombay to Calcutta

Excerpts from a letter by Richard Wright, Oct. 9, Calcutta, India

The last real news I wrote was from Bombay, so I shall continue from there on. We boarded an antiquated electric train in Bombay on a certain day back in August (25), bound for Calcutta, via Wardha (Mahatma Gandhi’s Village.) Our compartment was quite roomy with its leather cushion seats along three windows on each side. The mossstained, weather-beaten, ugly tenement buildings in Bombay and its suburbs appeared quite jumbled together as we went racing by, or more appropriately, as we went bouncing by, for Indian trains are better as massage machines than conveyances.

Gradually the scenery changed from antiquated buildings to more antiquated thatched huts, then to rich green marsh land, or lands spotted and striped with ponds and muddy streams wending weary trails through verdant — appealing countrysides with green grass, blocks of rice fields, grazing cows and their lonely young, and scantily clad cow-herder, a mere lad hanging onto a staff and hiding from the burning sun in a pointed hood, gazing quite forlornly at the rushing trains.

Toward dusk my artistic appreciation swelled high as I saw whole herds of these “humped-back” bullocks trudging wearily along muddy winding trails, heading for some lonely cluster of thatched huts, while the dreary-eyed lad tagged along behind, perhaps with visions of repeating the same thing tomorrow and for many days to come, or at least until he has sons of his own. By the way, these humped-back bullocks, smeared gray with mud, and standing to the ankles and higher in thick, mud-soaked heals, give one the impression of a rare combination of beauty and ugliness. Reams could be written of this impression.

Majestically beautiful are the tall cocoanut palms, outlined against a blue and changing sky, stalking like sad specters symbolical of the poverty and impoverishment of India. And how the emerald beauty of the hills, made round by jungle-like vegetation, glistened with the raindrops of the past few days. And the inspiration was climaxed by a huge, arching rainbow, toward which we seemed to be ever reaching, but never attaining. I shall reserve further descriptions for the future, so tbat I shall not be totally speechless when I return, but in one sense such descriptions could go on forever, for every new scene is worthy the pen of a poet.

Now online. Read the chapters online for free (or download as a free PDF): A Book About SRF’s Lawsuit Against Ananda 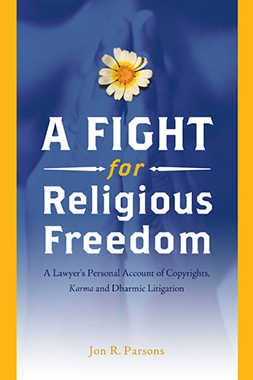